“These rough seas are home to numerous shipwrecks.”

I suppose there’s really nothing very wrong about what my student wrote. Of course he didn’t make clear whether he meant the seas were home to the events called “shipwrecks”—waves pounding the sides and decks, winds tearing the sails and bending the masts, rudder snapped, wheel out of control, panicked passengers huddled below, desperate seamen swarming above—or to the objects called “shipwrecks”—wrecked ships lying on the ocean floor, hulls stove in, masts splintered, treasure scattered on the drifting sand, fish swimming through empty portholes, sad skeletons partially encrusted with coral. I suppose if he thought about it he might say he meant both; I’m not sure he gave the question a lot of thought while actually writing, though.

Certainly the “rough seas” are places where there are such objects and events. “Numerous” is a rather flabby term here next to a noun of such violence and loss, but “many,” “countless,” “lots of” shipwrecks would be just as flat—and “shipwrecks aplenty” wouldn’t strike quite the right note, would it? So let “numerous” go.

What I can’t quite let go is “are home to.” Doesn’t “home” connote pretty much the opposite of despair, death, and destruction? We say New England is home to several august universities that were founded during the Colonial period. California has been home to the film industry since the beginning of commercial movies in America. New Orleans is home to the rich cuisine that is Créole. We might even say, or I might even say, Connecticut is home to me.  BUT would you say “Kansas is home to numerous tornados”? or “Cemeteries are home to numerous corpses”? Don’t things have to be alive to come, or be, “home”? Does the Dore illustration below suggest “home” to you, in any way?

Figures of speech can become so much a part of our ordinary language that we don’t pause to consider the pictures they evoke, and I think my student was betrayed by familiarity here. Blessed (or cursed) with a very visual sense of language myself, I find his perfectly ordinary statement oddly unsettling, perhaps even morbid.

Maybe I’m overreacting on this one. I welcome your comments! 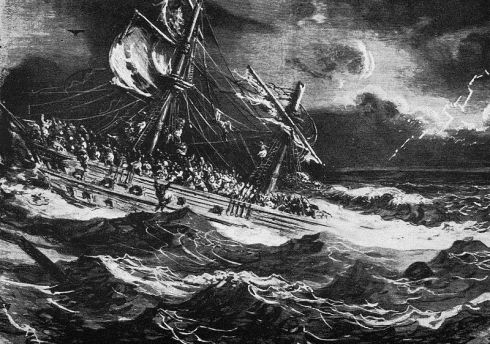 This bleak and terrifying image of a shipwreck is by the great 19th-century artist Gustav Dore; it is an engraving of his impression of the ship in the ballet “Le Corsaire.” Note the rough seas. Pretty homey, eh?

Teacher of English writing and literature (college-level); academic-freedom activist; editor and copy editor; theater director, costumer, actress, playwright. END_OF_DOCUMENT_TOKEN_TO_BE_REPLACED
This entry was posted on Saturday, April 4th, 2015 at 6:25 pm and tagged with figures of speech, Gustav Dore and posted in clear thinking, education, figure of speech, humor, student writing, word choice. You can follow any responses to this entry through the RSS 2.0 feed.
« “The knight gives his wife the choice, which I found…”
“Romeo and Juliet loved each other to death.” »

29 responses to ““These rough seas are home to numerous shipwrecks.””