“Frederick Douglass knew singlehandedly what it was like being a slave.”

My students are always deeply affected by Douglass’ Narrative of his life. To learn about “slavery” is one thing; to see it lived, through the eyes of someone who not only survived it but also fought his way through to a voice to express it, is quite another thing. Being in his agonies, his sorrows, his frustrations, his realizations, his incremental accomplishments beginning with learning to read and reaching not only freedom but also the platform to assist in freeing others, many of my students say their lives have been changed, or their understanding of life has been changed. This is what good writing can do.

I think my student’s error here was a simple retrieval problem: she meant “first-hand,” but her mental file clerk found “single-handed” instead. Obviously.

But in a sense he did know it single-handedly. He makes clear in his book that self-awareness, and particularly self-awareness for a slave, does not just happen; it is built. And Douglass built his himself: by listening to what his “masters” said among themselves, by pursuing reading once he realized that it was the key to a kind of power and liberty otherwise inaccessible, by deciding consciously what he wanted and what he was willing to risk in order to get it. His understanding of what it meant to be a slave, his awareness that what he felt was a consequence of being a slave, was knowledge and perspective that he achieved on his own. Single-handedly.

And in view of what Narrative of the Life of Frederick Douglass achieves, over and over, for readers—in view of the fact that before experiencing his book they think of “slavery” and “slaves” in only a generalized sense and afterward see it as a particular personal horror multiplied by millions—surely we can say Douglass did something single-handedly. We English profs wouldn’t say he “knew single-handedly” what it was like to be a slave, but single-handedly he has given millions of readers a deeper knowledge of it.

None of this is what my student meant. She just meant “first-hand.” I know this because that’s the point she went on to explain, not metaphysical musings like my own.

Still, she opened up these musings, and I’m grateful. 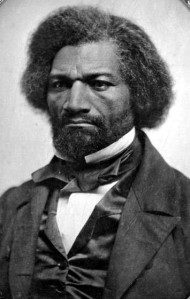 I feel personally close to Frederick Douglass because he and I have crossed paths via the places of my education. Frederick Morsell, Dickinson College class of 1962, has been doing a one-man show presenting Frederick Douglass since 1988; although we weren’t at school at the same time, Morsell and I did study with the same theater director at Dickinson, David Brubaker, and Bru talked about Fred a lot, even before Fred’s Douglass days. (Fred has also appeared at Dickinson with his show, but that alas was after my time. I hope someday to get the chance to see him.) When I went on to the University of Rochester, every time I went to the campus center I saw the magnificent bust of Douglass, the man after whom the center (the Frederick Douglass Building) had been named. In fact Rochester, New York, is a place with great resonance for Douglass: here he gave his famous “Fourth of July” speech; here he lived and eventually was buried, in the cemetery I walked past every day to get to campus. And now I teach some of his writing. Our paths have lightly crossed, and because of his works I understand some of his experience along the long and amazing actual path of his life.