“She found her place in the social higher arky.”

Pre-Spellcheck, pre-Autocorrect, my student was working with a concept but evidently had never seen the word written down.

Well, actually, she may have seen it written down. In grad school I had a fellow student who presented a seminar paper that was full of the expression “I’ll bite.” At least that’s what I heard. I wondered why he was repeatedly inserting a jokey aside (isn’t it what we say when asked a riddle that we know has a humorous answer we can’t immediately come up with?) into a paper that was in every other way definitely boring and probably scholarly. Ever nosey, I asked him afterwards if I could see his paper. The word was “albeit”—of course, how scholarly an adverb! But he had evidently never connected the pronunciation “all-BE-it” with that German-looking collection of letters; and, although he had probably never heard another academic speaker say “I’ll bite”—or “Ah’ll Bite,” which was actually how he sounded—he did his best. Similarly, my student may have seen the word “hierarchy” without associating it with the term she kept hearing in various contexts, “higher arky.” She may have thought that word “hierarchy” was pronounced “hair-archie,” or “air-archy,” for all I know. Or “Here, Archie!” as Betty might have said to invite that merry lad to hit the floor with her at the sock hop.

I wonder what she thought an arky looked like, and then what would make a higher one. Is it anything like Noah’s ark, but cuter or smaller?

At least that would give the word the biblical spin it deserves.

I’ve been using “hierarchy” for a really long time, but it’s only this morning that I learned its derivation and full list of meanings. I have lived my life in hierarchical structures. I grade according to a hierarchy of skills and competencies. I know that way back when it had to do with holiness and with ruling, because I learned all my Greek and Latin roots, prefixes, and suffixes faithfully back in high school. and that’s where Webster’s begins too.

Its first meaning is “a division of angels.” That great list in, or amplified from, the Bible—Angels, Archangels, Principalities, Powers, Virtues, Dominations, Thrones, Cherubim, and Seraphim—is called the “choirs of angels” and has been divided further by the Fathers of the RC Church into three “hierarchies.” I guess if you’re going to buy into the Great Chain of Being, you have to account for all the links.

The second meaning Webster’s gives is “a ruling body of clergy organized into orders or ranks each subordinate to the one above it.” Great Chain continues.

The third meaning moves into the secular: “a body of persons in authority.” Presumably they too are ranked.

The fourth meaning allows the abstract or figurative: “a graded or ranked series,” such as spiritual virtues or the linked actions of a machine. Here is where a social hierarchy would fit, presumably, since social orders, while definitely ranked, don’t usually have official officers for each tier.

I’m touched that my student believes a person could “find her [or his] place” in a social hierarchy, though, or in any hierarchy for that matter. Everything I know about hierarchies suggests that the hierarchy does its own placement of newcomers.

An arky, on the other hand, might be discovered and selected by some young woman wandering by (I’m seeing Little Red Riding Hood, Gretel, or another of the traveling girls of fairy tales). Picture little Noah’s Arks, stacked one on top of another according to size, with the tiniest on top. Then picture LRRH—or Alice!— looking up at the tower of arks and choosing the one that seems most attractive, or most accommodating, to her. She proceeds to clamber up to “her place.”

Actually this does seem more American, somehow: the individual spotting the perfect place and then, dammit, going there!

More fun than a barrel of angels! 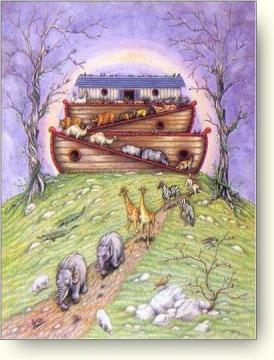 This single ark seems to have a higher arky of its own, with all those levels…
(image from http://www.inspirationline.com/BEWorld/NoahsArk.htm)