“Both of these women grew up in the time of the Enlightenment, where people separated the mind from the body.”

If any of us in the teaching racket prides himself or herself on clear lectures, good graphic illustration of abstract ideas, or careful definition of terms, let my student’s sentence serve as a huge red CAVEAT. Be humble. Much seed falls on stony ground.

We had been reading some of the letters and fictions of women thinkers of the Enlightenment in France; this sentence is from a subsequent paper discussing them.  (Readings of the prominent male figures of the Enlightenment, in Europe and America, were also a hefty part of the unit.) Of course one must lay some foundation for the readings, by way of a quickly sketched summary/definition of the Enlightenment, or Age of Reason, and I thought I had done a good job of that, cautioning my students that I was presenting a somewhat simplistic definition that their readings would refine and add nuance to. I talked briefly about the great movements and events that had preceded and fed into the Age of Reason: the Protestant Reformation, the Renaissance, the establishment of the Royal Society (1660) that finally demarcated science as a study separate from religion, the spread of the printing press. And then, of course, I drew Plato’s charioteer. If you follow the link here, you’ll go to a page provided to students and the public by Bruce Janz, of the University of Central Florida, presenting the relevant Platonic dialogue, as well as this handsome piece of statuary: 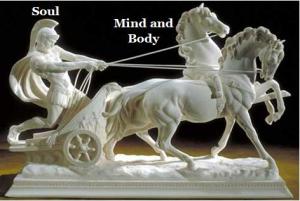 Prof. Janz has labelled the components of this allegorical image. Doesn't your soul feel like this most of the time?

You remember the chariot, surely: it depicts the soul. Two horses draw it: spirit, or intellect, and body, or passions, or appetites. The charioteer who struggles to keep both horses headed in the same direction is Reason. Thinkers in the Enlightenment argued that Reason not only should rule life but also could lead us to an understanding of (pretty much) all things.

I then spent some time elaborating that idea and mentioning the cultural and philosophical areas in which writers of the time were most interested.

And here’s what my student got out of that: not a charioteer controlling two horses; not an idea of in intellect shaped by a belief in independence and easy access to classical and contemporary writers; not an investment in human reason as the key to human progress. Instead, he offers an image of a bunch of surgeons—in wigs, knee breeches, silk stockings, and embroidered waistcoats, to be sure—carefully removing everyone’s brain.

Perhaps it serves as a kind of precursor to the French Revolution and the guillotine, come to think of it, when people certainly were separating the head from the body. You don’t need a surgeon for that.

Early in my teaching career I had just finished what I thought was a really stimulating class in my American Literature course (yes, I’m a “generalist,” de facto). I was gathering my things and noticed that a student had left a notebook behind. I couldn’t resist taking a look at her notes, expecting to see my carefully structured lecture/discussion laid out in all its glory. What I found was every joke or anecdote I had used to clarify or lighten the lesson, carefully transcribed…and nothing else. Now, when I was a student I was fascinated by a very bright, very intense, and rather eccentric fellow student (the ideal then) who was a gifted cartoonist. He sat in class with a drawing pad and filled the pages with large cartoons in his distinctive style, turning page after page as the lecture or discussion proceeded. The cartoons were not illustrations of the material; they were just drawings. BUT from time to time he would write something in the margin of the cartoon-in-progress, or provide a text balloon so the drawing could speak, and in those spots he would be taking notes. Nothing like that had been going on with my student, though: she was just copying down the jokes. Would her memory of the actual course content be jogged by association with the anecdotes? Well, maybe. She was in fact a very good student, at least when she wrote papers or exams, and she did participate in class discussions from time to time. So yes, we all have our own learning styles. I myself filled the margins of my notebooks with doodles, quite often a stylized rose I had devised out of the initials of one of my indelible crushes but sometimes a sort of sketch of the professor, or a picture of a phrase (even then, what an active mind’s eye I had when it came to figurative language!); and when I become a professor I continued this practice in faculty meetings, sometimes later having to rely on the doodles to remind me of what had transpired.

But what could the Enlightenment (but alas not enlightened) student have written down, or perhaps just sort-of remembered, to represent the Enlightenment? Maybe on the spot he distilled the whole presentation into “people separated the mind from the body” and never looked back. It’s not that far off, really—just far enough to make a bizarre mental picture and suggest a less-than-perfect paper to come. That, unfortunately, is too far.