“Rip Van Wrinkle woke up after sleeping for twenty years.”

Most of my students bring to Washington Irving’s story an assumption that Rip Van Winkle slept for a hundred years. Irving was writing a folk tale (for The Sketchbook of Geoffrey Crayon, Gent.), but today’s students have been raised on cartoon versions of fairy tales, and most people who fall asleep in fairy tales sleep for a century, I believe. Furthermore, today’s students are more likely to have seen an animated version of this story than to have read it in a book. And images of the famous sleep-off-the-gin-binge gentleman depict him as very old indeed, from the earliest images we have. Take a look, for example, at John Quidor’s painting. John should have known: he himself was born in Tappan, New York, just across the Hudson River from Washington Irving’s Irvington farm, “Sunnyside,” and not far from the site of Rip’s al fresco nap in the Catskills. How close to the thing itself can you get? 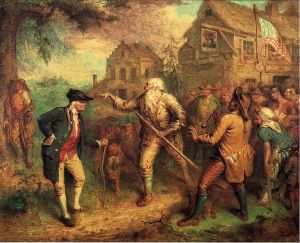 Rip Van Winkle, by John Quidor. You can see the original in the National Gallery; you can see this image courtesy of wikicommons.

Now, observe him. Look how ancient he seems.

And I imagine that’s what was operating in the delightful mind of this student writer.

I happen to love the name “Rip Van Winkle.” It really does strike the American ear as very Dutch, appropriately enough for a resident of the banks of the lower Hudson River. I also think of winkles—first of all, the oyster-killing marine snails, themselves edible; then the verb for getting the little buggers out of their shells for a human snack. The periwinkle is one kind of winkle. The periwinkle is also a ground-cover plant with blue flowers, and I must thank the Crayola company for introducing me to “Periwinkle Blue” before I ever saw the flower (or the snail). Can you imagine Rip Van Winkle perhaps gradually disappearing beneath a carpet of periwinkles? What of all this free-associating did Irving want me to indulge in when he named his protagonist? Who can say? But the sound of the word and the creatures who share it as a name are small, unimportant (except perhaps to an oyster). Irving says Rip was fun-loving but “hen-pecked” (his term, not mine!) and consequently meek. And of course there’s “wink” sitting right there in the name: the flirtatious eye-twitch and also a name associated with naps: forty winks. The -le suffix makes it diminutive. Rip from-the-little-nap. Only twenty winks.

But my student had seen some cartoon version. Or perhaps he had gone to the National Gallery. Or maybe he had read the Classic Comic. In these depictions, Rip looks like a very very old man when he wakes. This despite the story, wherein Rip is father to two children when he wanders off into the Catskills and hoists a few with Henrik Hudson’s ghostly bowlers, and discovers on his return that the children have become adults. So he’s far from a sexagenarian when he begins his adventure, and hence far from a snowy-bearded old fogey when he returns. Irving also says that during his absence his beard has grown “a foot long,” indicating that he started off clean-shaven, and describes that beard as gray. But Quidor (and the other depictors) gives him a lot more than twelve inches of Van Winkle whiskers, all Santa-white.

So: when he wakes up, he has become, or taken on the appearance of, an old, old man, according to the pictures.

The village, the society, the culture have all changed a great deal during his absence. But that’s because the American Revolution has happened, not because things have been slowly evolving.

Anyway, you KNOW what’s coming. If any auto-correct was going on when my student was writing his paper, it was in his mind’s eye, not in the word-processing program.

There in Rip’s name, as on his face, wrinkles. Rip Van Wrinkle.

Now, I dare you: Say my student’s version of the name three times, and then try to remember what Irving wrote.

Teacher of English writing and literature (college-level); academic-freedom activist; editor and copy editor; theater director, costumer, actress, playwright. END_OF_DOCUMENT_TOKEN_TO_BE_REPLACED
This entry was posted on Saturday, May 18th, 2013 at 8:18 am and tagged with Catskill, Henrik Hudson, Hudson River, John Quidor, Washington Irving and posted in education, great typo, humor, inaccurate reading, literature, student writing. You can follow any responses to this entry through the RSS 2.0 feed.
« “The word ‘night’ is quite commonly associated with the idea of darkness.”
The Lead In Your Pencil »

13 responses to ““Rip Van Wrinkle woke up after sleeping for twenty years.””